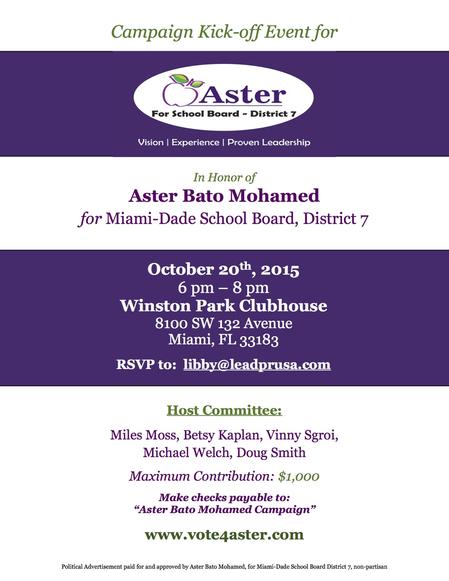 DISTRICT 7
In District 7, Navarro faces retired teacher Aster Bato Mohamed to hold on to the seat that covers parts of Kendall, South Miami Heights and Homestead.
Navarro was executive director of intergovernmental affairs for the school district until shewas appointed to the school board by Gov. Rick Scott in February 2015. The seat was left open after U.S. Rep. Carlos Curbelo won election to Congress.
Navarro, who also has experience serving on the Redland Community Council and in the U.S. Coast guard Auxiliary, has positioned herself as a champion for children with special needs. She points to the creation of a certification program for marine technology jobs, and rolling applications for magnet schools, as some of her accomplishments while on the board.
“I’m very happy about it because it creates choice in our public schools,” she said.
Mohamed was a classroom teacher for 17 years and also worked on parental-engagement initiatives within district administration. Her résumé also includes numerous volunteer positions with local organizations such as the Miami-Dade Police Kendall/Hammocks District Advisory Committee and Kendall Federation of Homeowners Associations.
Mohamed, 72, wants to lobby Tallahassee for changes to the state’s standardized testing and work with parents to get them more involved in their kids’ schools. She also proposes partnering with the business community and libraries to provide more programming in the arts and sports.
“It takes the whole community to educate,” she said.
Voters go to the polls Aug. 30. Runoffs, if necessary, will be held Nov. 8.
Christina Veiga: 305-376-2029, @cveiga

School Board races heating up in Miami-Dade

Aster In The News: 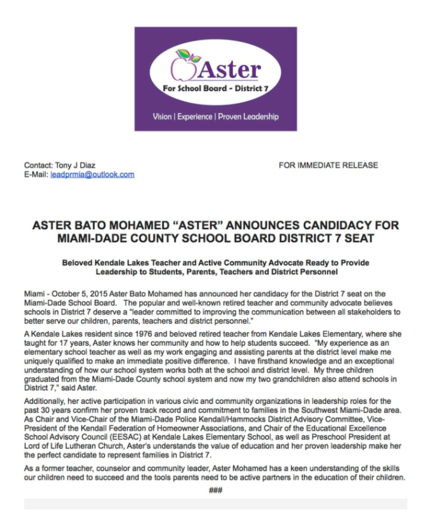